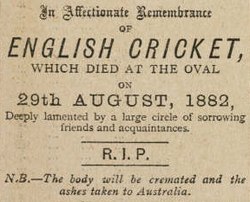 The events of June 25th 1932 would not have taken place if not for C. K. Nayudu. He is singularly responsible for India joining the ranks of Australia, England, South Africa, West Indies, New Zealand as the sixth test playing nation in the world.

The British brought the game into India. The Parsees were the early adopters of the game. They tried to use the game as a means of establishing closer relations with the rulers of the land. Their request for a game against the colonial masters was accepted in 1877 when a two day game was organized and the Parsees surprised the British by even taking the first innings lead. The game ended in a draw.

The Parsees were entrepreneurial by nature. They pooled in resources and went on cricket trips to England in 1886 and 1888. Though in terms of results, these tours were largely unsuccessful, they did initiate reciprocal tours from English teams to India.

One such tour was organized in 1926. The MCC team was led by Arthur Gilligan who had made his test debut in 1922 and was made the English team captain in 1924. The MCC team had with them test cricketers like Maurice Tate, Andrew Sandham and a future England captain Bob Wyatt. They were supposed to overwhelm Indian cricketers and did so until they met C.K. Nayudu.

C.K. Nayudu was born in Nagpur on 31st October 1895. He showed his talent for cricket from a very young age. He was the captain of his school cricket team. He also made the hockey and football teams. He grew to be tall and handsome young man and made his first class debut in 1916.

On his debut, playing for the Hindus against the Europeans, he was selected as an opening bowler and consequently batted at number 9. With his side in trouble at 79 for 7, he managed to provide sufficient support to the grand old man of Indian cricket – Prof D.B. Deodhar. Hindus managed to reach 155 with Nayudu contributing 27. The Europeans first innings got off to a bad start with Nayudu taking the first wicket to fall. Fantastic bowling by the Hindus ensured that they restricted the Europeans to 112 and took a first innings lead. Another batting collapse by the Hindus in the 2nd innings, gave the Europeans a target of 196 which they surpassed by losing only 4 wickets. Nayudu had shown why he was highly regarded by experts in this game.

In December 1926, the MCC team led by Arthur Gilligan stopped at Bombay. There was much excitement about the game as more than 25,000 people entered the Bombay Gymkhana, which would later be India’s first ever test ground. In reply to MCC’s first innings score of 363, The Hindus were reduced to 84 for 3. C.K. Nayudu, by now a crowd favourite wherever he went in India, strode to the crease. The MCC team so used to steam rolling opponents received a mighty shock. Over the next 116 minutes, Nayudu produced a dazzling display of batting. He set the precedent of great Indian batsmanship something that future generations have emulated.

In that innings he gave scant respect to county cricket luminaries like Maurice Tate, Jack Mercer, Bob Wyatt and Stuart Boyes. He scored a scintillating 153 which contained 11 sixes, a then world record for the most number of sixes in an innings. This innings transformed Indian cricket. Till then, known only for providing cannon fodder to English players to improve their averages, Indian cricket took a giant leap that day. All thanks to one man – Nayudu.

The Hindus scored 356 and drew the game. This knock was a game changer for Indian cricket. Arthur Gilligan, the MCC captain impressed by C.K. Nayudu, became a strong proponent of Indian cricket and lobbied for test status for India. He also encouraged Indians to take more initiative in running their own cricketing affairs. This resulted in a governing body that was formed in 1928 and we know that body as Board of Cricket Control in India.

C.K. Nayudu has the distinction of being India’s first test captain. India toured England in 1932 and Nayudu played a major part in the selection of the team. At that time, Indian cricket needed the patronage of the royals. Expenses had to be borne by somebody and this job was fulfilled by the kings. So Maharaja of Porbandar was chosen as the captain and Ghanshyamsinhji of Limbdi as vice-captain. On arrival in England, Maharaja of Porbandar withdrew on the account of poor health. On the eve of India’s first ever test, Limbdi suffered a back injury and the reigns were handed over to C.K. Nayudu. It was the invisible hand of destiny that ensured the man, chiefly responsible for India’s test status, becomes its first captain.

India started their debut test well and had England down 19/3. But the more experienced English team weathered the early storm and managed to put on 259. Nayudu, who had received a painful injury to his hand while fielding, soldiered on to top score with 40. India managed 189 before succumbing to the English by 158 runs.

The following year, Douglas Jardine led an English team to India. Nayudu was retained as captain for the test matches. A crowd of more than 100,000 people watched as India took on England in the first ever test on India soil – the same venue where Nayudu, had in 1926, torn apart the English attack to set India on its way to test status.

C.K. Nayudu continued to play first class cricket right up to sprightly young age of 68. With his dashing good looks, he even was chosen to promote a movie. He became the first Indian cricketer to endorse a brand in 1941.